What is a recorder?

An introduction to the recorder family

The recorder is one of the oldest wind instruments and was used extensively as a solo and orchestral instrument in the baroque era and earlier.  It works similarly to a flute (another name for the recorder is the "block" flute), but it is played with the instrument in front of the player (rather than to the side like flute).  It consists of a whole family of instruments, the soprano and alto being the most common sizes.  Because recorders come in a variety of sizes, their sounds vary greatly.  The high recorders are clear and silvery, much like a flute.  The low recorders are woody and mellow.

"Okay, but isn't a recorder that little plastic thing that kids are forced to play at school?"  Well, yes and no...  Because student recorders are inexpensive and you can learn a few simple songs on them relatively quickly, they do make an ideal instrument for students to learn in a classroom setting.  At the same time, many people pursue the recorder as a serious classical instrument.  Some people study it at college and play professionally.

Why play the recorder?

👍 Because it's fun!  Playing an instrument can be a fun and rewarding activity, and the recorder is no exception.  The benefits of music education are well known, but let's not forget that it's also just fun and joyful to make music.
👍 The recorder is for everyone.  The recorder is relatively inexpensive, and it's fairly easy to learn the basics, making it a great choice for many people.  For the serious player however, the recorder is as challenging to master as any other instrument and offers unlimited potential for artistry and expression.

👍 The recorder is a great first wind instrument.  This is not to say that the recorder should be learned and then "traded up" to a different instrument, but that it is a great stepping stone to learning additional wind instruments.  Wind players often play multiple instruments (in  Broadway shows they often have to play flute, clarinet, sax, and sometimes even recorder - a skill wind players call "doubling" - even though it's often more like tripling or quadrupling).  Recorder is a very accessible instrument for young players, and can establish proper wind playing skills which can be easily built on in the future.
👍 The recorder has a unique repertoire, particularly from the baroque and "early music" period (when many other woodwind instrument hadn't even been invented yet).  It has also experienced a resurgence of popularity among modern composers due to its unique sound qualities (recently, it was featured in the theme song from The Mandalorian - much to the recorder world's joy!).

👍 Many people simply fall in love with the sound.  In well-trained hands, the recorder has a sound that is beautiful and otherworldly. 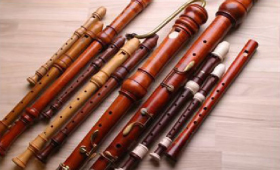 an example of many of the instruments
in the recorder family

👍 While piano or violin are common choices for starting younger students, some students will naturally gravitate towards a wind instrument if given the choice.  The Suzuki Recorder method is a fully developed curriculum on par with all other Suzuki instruments, consisting of 8 books (for soprano and alto recorder) and recordings by world famous recorder soloist, Marion Verbruggen.

👍 Despite being readily available in plastic student models, recorders are often handmade by highly trained instrument makers. They come in various woods or other materials (each imparting a distinct look and sound).  Some are highly decorative and are considered works of art by many. 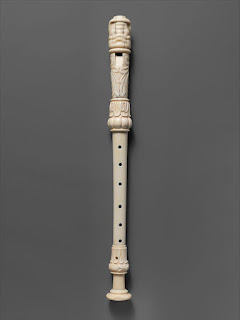 beautiful, decorative recorder
dating from around 1700

👍 The recorder has a large community of players worldwide, both professional and amateur.  Groups like the American Recorder Society connect people in America and abroad, offering performance, social, and educational opportunities for recorder players.